On the branches of a Shihuahuaco tree

“The trees are our memory. In their roots and in their radicality is the essence of what we are. What we will be… And we have the fortune of the trees always waiting for us with open arms.” 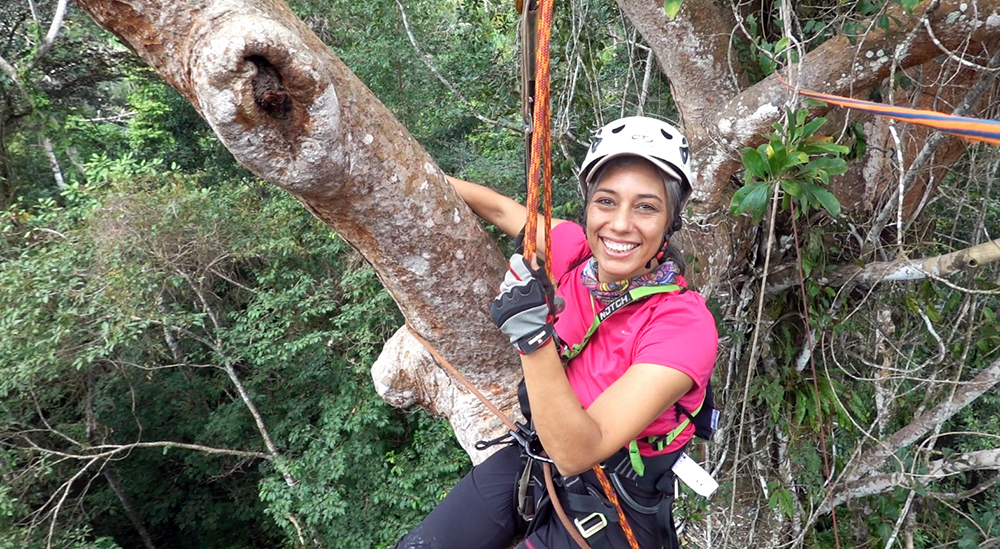 It was its open arms that Tatiana dreamed to one day reach, the tallest of branches of a giant Shihuahuaco of over 50 meters of height. Ever since she started dedicating herself to investigating the trees most threatened by illegal logging in the rainforest – those of the Dipteryx sp. species in particular – she’s managed to determine the age of over a hundred of them that still stand in the Las Piedras river basin. It is there that ARBIO Perú, an organization she’s the founder of, carries out their conservation activities in Madre de Dios. Reaching the tallest of branches, scaling the height of the trunk, and feeling the immensity of seeing the rainforest from those open arms; it was a long time coming. 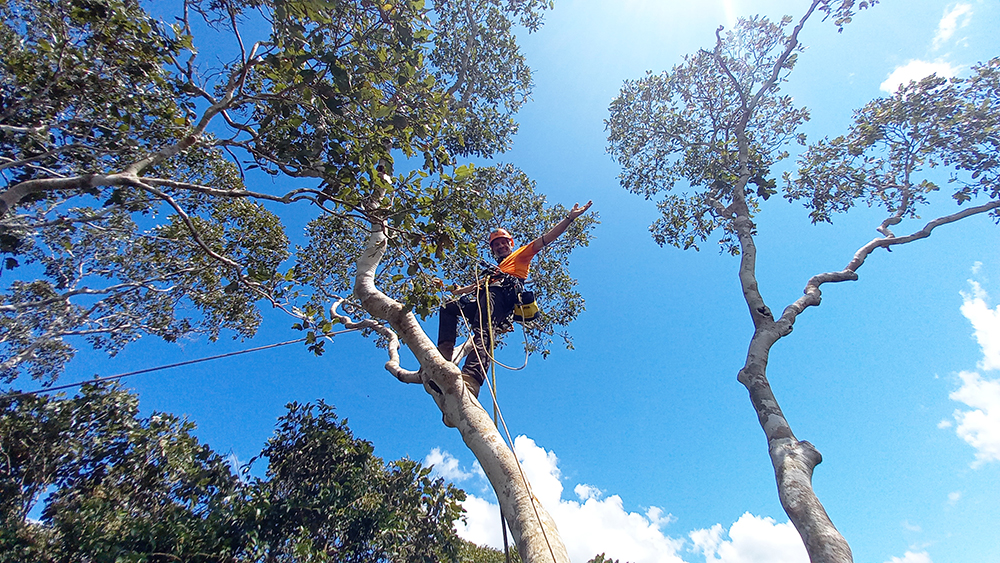 Andrea Maroé, an Italian agronomist and arborist who has climbed over 10 000 trees around the world, found these still-living giants in the Las Piedras river basin through satellite images. It was by contacting Tatiana that they managed to scale together the “Tayta” – a beautiful Shihuahuaco under the protection of ARBIO’s rainforest. They had estimated from the base by using a laser hypsometer (a measuring tool utilized to determine the height of threes from the ground) that the tree’s canopy was 40 meters above them. When they climbed, Andrea reached the tallest branch and from there dropped a weighted tape, a technique called “Direct tape drop”. With it they determined the exact height of the giant: 54 meters.

Together they were also able to measure the circumference of the trunk, 5 meters above ground, which resulted in a longitude of 4,94 meters. With it one can get the diameter, which resulted in 1,57 meters. This, then, allowed Tatiana to calculate the age of the tree, putting it somewhere between 1000 and 1200 years of age. 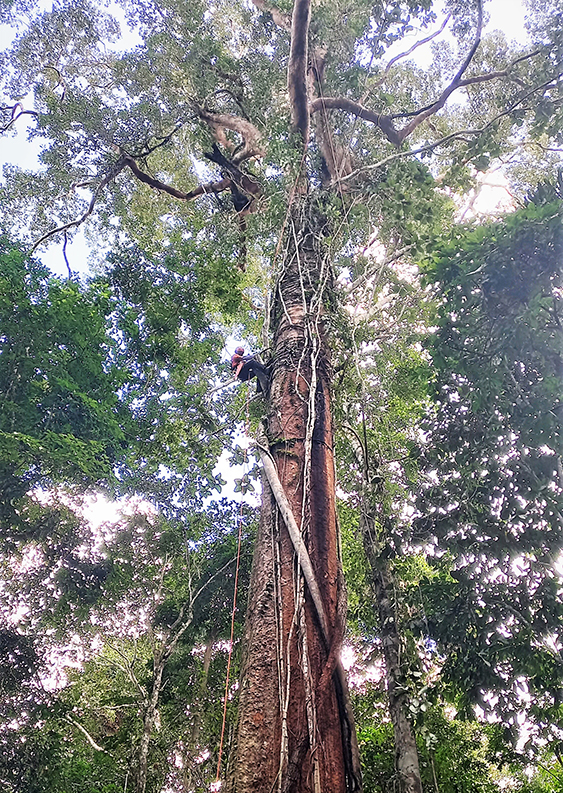 From that height, Tatiana and Andrea observed and were observed by raptor birds like a pair of slate-colored hawks (Buteogallus schistaceus) and macaws flying over the canopy, curious of the new mammals atop the giant.

The climbing team was joined by Celler Carbajal, a forest engineer and climbing enthusiast who facilitated the necessary equipment for Tatiana to get up there. The park ranger team of ARBIO accompanied the expedition in order to help the reach this millenary giant in the middle of the dense rainforest. 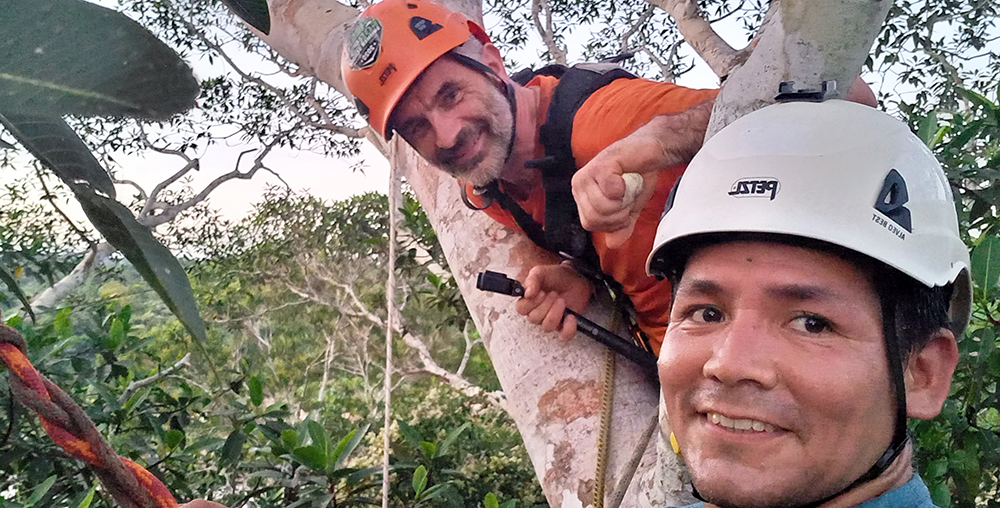 the foliage of giants like the Shihuahuaco that exceed 50 meters in height still a complete mystery to us. Some studies and expeditions ad hoc are starting to go underway all over the planet, but the world residing atop the trees of over 50 meters in height remains a virtually unexplored realm. 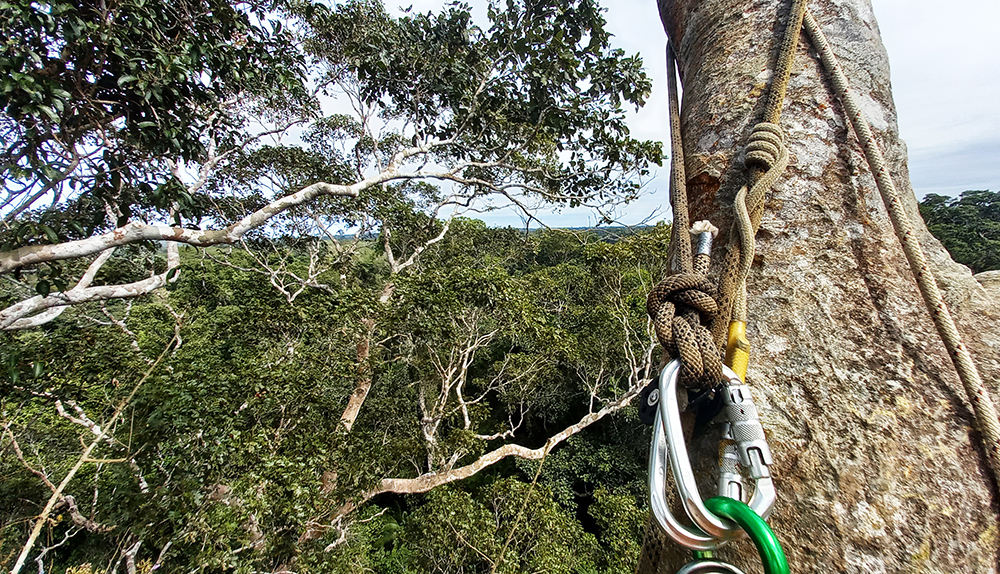 Andrea Maroé is the founder of the Big Trees Foundation, an organization dedicated to studying, measuring, compiling data and photographing the least known places in the planet after the depths of the ocean: the treetops of threes of over 60 meters in height. Equipped with ropes, harnesses, carabiners, small air-pressure cannons specifically made to launch lines over branches higher than 40 meters in height, hardware for measuring the age of plants; the explorers of the foundation will go on this expedition to the Amazon in 2022 to try and find new species, as well as looking for a new height record of trees in South America.

The impressive sight of the rainforest from up the branches of a Shihuahuaco of over 54 meters of height reinforces in Tatiana the gratitude and reverence one must have for these marvelous beings that make up the structure of the forest.

Without these giants, the rainforest will simply collapse — they are the columns that hold up this ecosystem, they give shape and structure to the natural architecture that houses the biodiversity that are the hundreds and thousands of species living under their roof. Learning from them, then, is an unavoidable task for all who see themselves as part of nature, all who value nature, and all who wish to be part of nature’s conservation.