The Amazon isn’t only a pair of lungs, but also the heart of the planet

The great Amazonic trees not only catch CO2 and give us oxygen to live, but they also act as gigantic water pumps that suck the moisture from below the soil and carry it to the sky.

But… how does this happen?

Thanks to the transpiration of the trees’ leaves, the water in the soil – gathered by the roots – is transported to the sky. All of this moisture merges with the evaporation of the Atlantic Ocean, and that’s how the (sadly mostly unknown) “flying river” gets created – a great flow of atmospheric humidity which can carry more water than the Amazonas River. This impressive process is done daily by the over 300 billion trees that exist in the Amazon, each and every one of them with the capacity of sending approximately 1000 liters of water into the atmosphere every day.

Now, what path does this river take?

If flies at astounding speeds over the Amazonic rainforest until it reaches the Andes Mountain Range, with which it collides and whose glaciers and snow peaks it feeds. The melting of these creates the rivers and valleys of the Pacific coast. This means that, thanks to the flying rivers, the water reserves us in South American coast make use of are capable of existing. 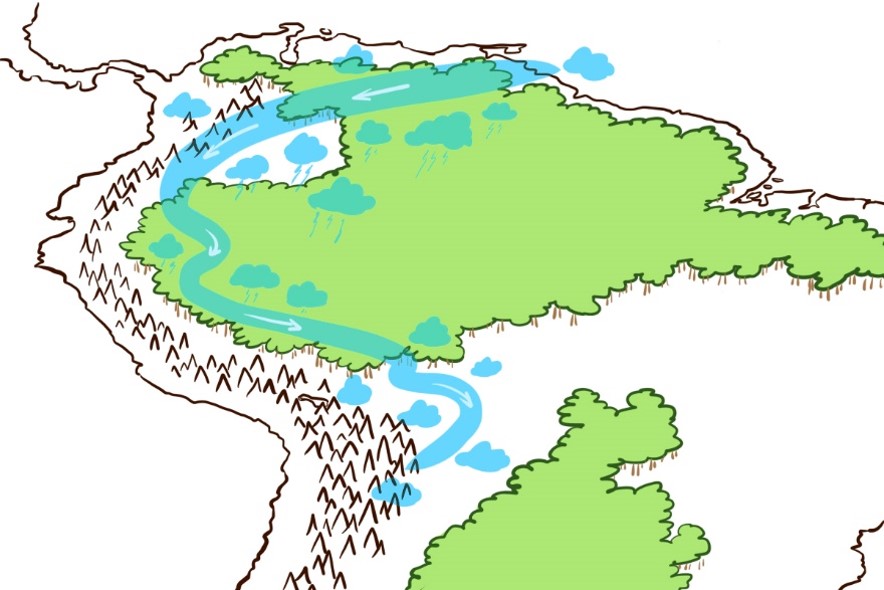 After that, it heads south to rain over parts of Brazil, Uruguay, Paraguay, and the north of Argentina. As such, we should thank the flying river for making agriculture products and life in South America possible – since all of that is sustained by it.

However, we’re faced with a big question: how come such a vital river for all of us remains not only unknown but also damaged?

Because, even if as humans we cannot manipulate the clouds nor the humidity that flies over the Amazon (though we’re not too far off), we can (and are) deforesting our forests, which host the main beings responsible for this flying river: the trees.

I want to adopt an Amazonic Tree

We’ve always heard the rainforest is “the lung of the world”, considering it provides us with the oxygen we need to breathe. However. Isn’t the flying river one big artery in which the blood of the Earth flows through? The indispensable water for every living being?

The Amazon that still remains isn’t only a pair of lungs, but also (knowing all of this) the heart of the planet.