Shihuahuaco, Gods of the Forest and Global Commodity 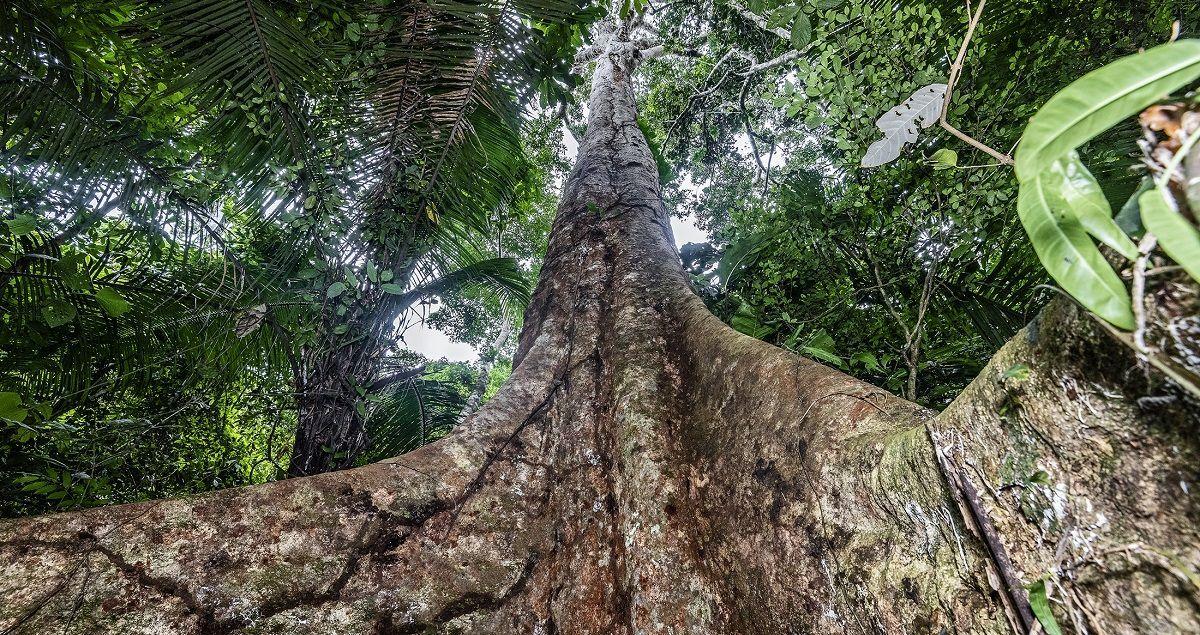 A thousand-year-old shihuahuaco tree stands in the middle of the Las Piedras forest in the Madre de Dios region of Peru. Image by Michael Tweddle. Peru, 2022.

Many of the trees that dominate the Peruvian rainforest were already growing when the medieval Crusades were being fought, before the birth of Genghis Khan and centuries before the rise of the Inca empire and the discovery of America. Today, ancient species such as the shihuahuaco are being threatened by the hand of man and the incessant demand for timber that moves thousands of dollars in the global market.

Every tree felled represents a shortening of the time left for life on the entire planet; every tree felled is a step in climate change towards global disaster. Forest loss in the Amazon is increasing every year. According to a recent report by the Ministry of Environment (MINAM), Peru obtained a historical record of deforestation with more than 200,000 hectares of forest lost in 2020.

There are more than 40 species with proven commercial timber value in Peru. However, half of the value of the wood that Peru exports is from a single species: the shihuahuaco, a founder of the territory, a very old species, really old, capable of reaching 50 meters in height. A god of the forest against which the forestry activity has arranged its resources: in Peruvian territory 184,000 shihuahuacos are cut down per year, that is to say, 504 trees per day, 21 per hour. 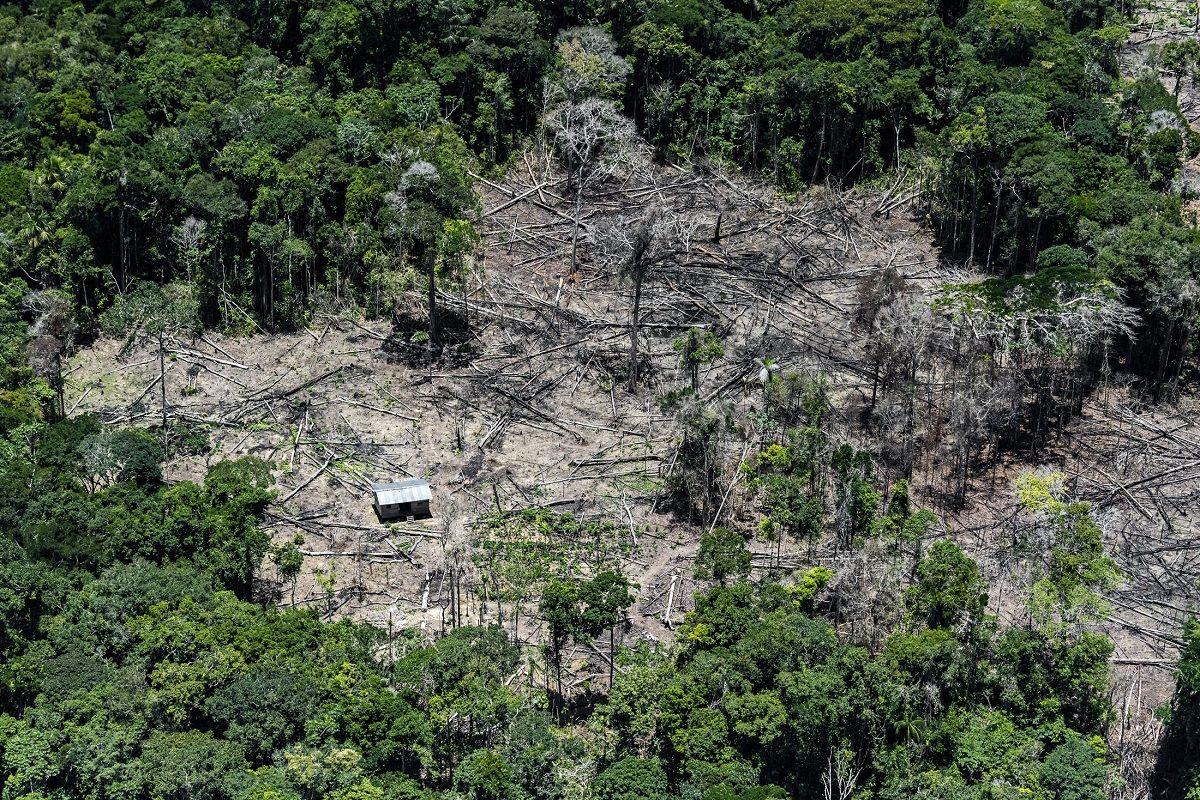 Deforested area in the Peruvian jungle, where the shihuahuaco tree grows. Image by Michael Tweddle. Peru, 2022.

Imagine an entity, one of those massive walking trees like the ones Director Peter Jackson presented in Tolkien’s Lord of the Rings – but imagine it more leafy and firm, clinging powerfully to the meager rainforest floor, with roots extending like curtains several meters over the ground. It houses birds like the harpy eagle (considered a vulnerable species by the International Union for Conservation of Nature) and who knows how many more species of beings, both biological and mythical: the original communities know just which ancestor they’re speaking with when they speak with the shihuahuaco. The teachings of these primordial inhabitants of the forest are inexhaustible. But they aren’t.
It can take more than 300 years for the trunk of a shihuahuaco to reach 51 centimeters of diameter – the legal minimum to justify felling it. According to forest engineer Tatiana Espinosa, who has been working for over 15 years protecting the forests in the Las Piedras river basin, Madre de Dios, this puts in evidence the unsustainability of their timber management. “It is of no use planting young shihuahuacos in deforested zones because their growth is extremely slow,” she mentions.

The biological characteristics of the shihuahuaco make the extraction system of plots for 20 years utilized legally in Perú (a practice copied from the management of temperate forests, which have completely different dynamics) impossible. “Supposedly, the forest should recover in 20 years, but that’s not possible,” Espinosa explains. “The forest is degraded when you open roadways and cut trees with high commercial value, since it loses biomass and therefore habitat for the wildlife. It turns into a degraded forest with compacted soil. These cases of degradation occur both in timber concessions and non-timber concessions where, ironically, timber is also extracted.” 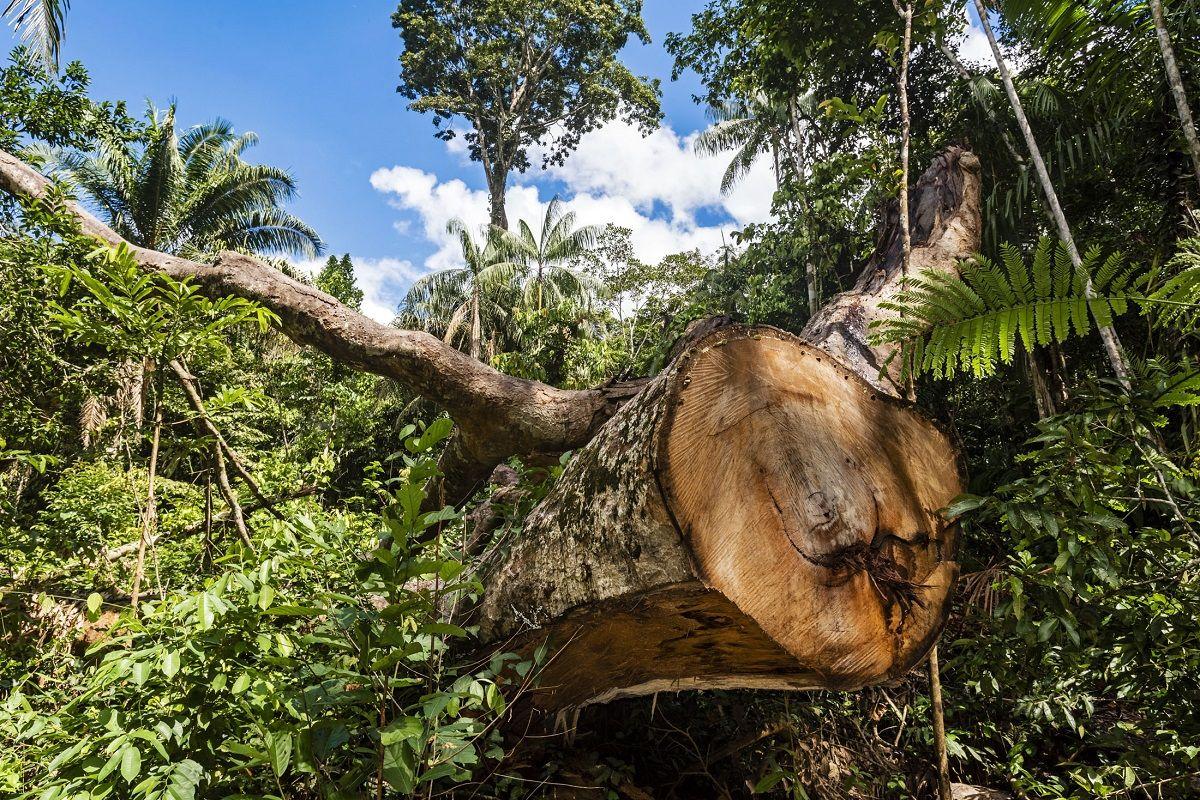 Even if the amount of money a shihuahuaco produces in the timber market (millions of dollars) is nothing in the face of its ecological value (even long-term in the form of carbon dollars), it is enough to start an engine with ambitions of global reach. Science thinks its exploitation needs to stop, but economy gets the final word in this world and it sees in the shihuahuaco a sensational commodity. It doesn’t matter that, to extract the giant amputated trunks from the middle of the jungle, one has to open up paths and further degrade the forest (shihuahuaco trunks cannot be mobilized via boat).We know what comes after the machine opening up the path; we know how it crosses paths with the toxic clearings left behind by the alluvial gold mining, how it narrows the territories of the original communities, how it entwines with the routes of illegal logging and drug trafficking, illegal animal species trafficking, human trafficking, of the national and international production of refugees and displaced people.

But the iron wood parquet is extraordinary. It’s resistant like steel, with a reddish-brown color and pronounced streaks that showcase the rings of its long growth years. It comes from the Amazon rainforests of Perú and sells like hot bread. There have been paths opened up in the rainforest wide enough for a truck with three shihuahuaco trunks to drive to the port of Callao to begin its maritime journey to North America, Europe, and (mainly) China.

According to an investigation carried out by the Environmental Investigation Agency – an organization that investigates and campaigns against environmental crimes and abuses –, Perú continues exporting illegal timber from all its ports, from almost all exporters and towards all destinations. After the seizure of timber of the Yacu Kallpa case – a cargo ship carrying illegal timber from the north of Perú’s Amazon – the United States of America have been more careful of the illegal timber exported from Perú. Even so, the Peruvian timber industry and its allies in the Government continue to oppose the advances, weakening regulations and favoring illegality. 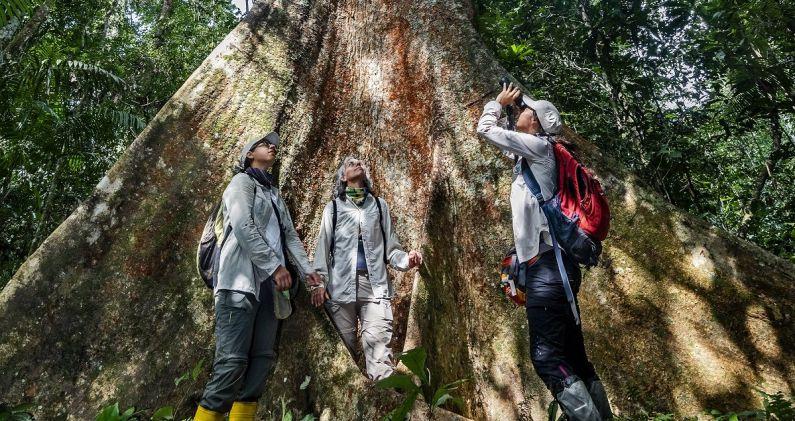 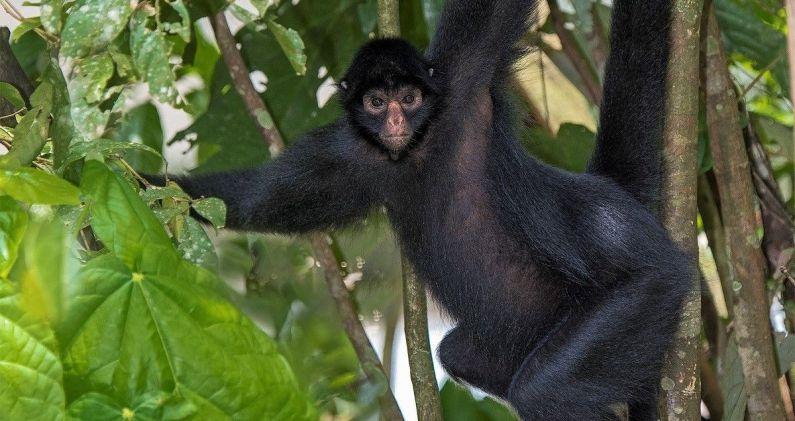 The shihuahuaco forms part of the habitat of species such as the spider monkey, considered endangered by the International Union for Conservation of Nature. Image by Michael Tweddle. Peru, 2022. 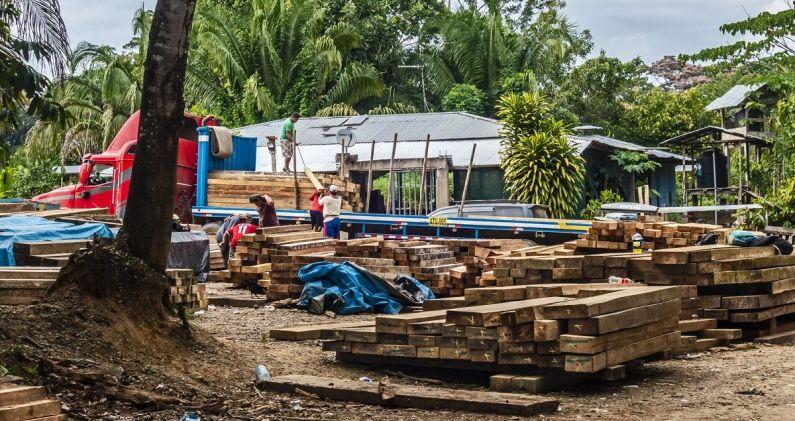 The shihuahuacos are transported to sawmills located along the Interoceanic Highway, a highway that connects the Pacific with the Atlantic and provides access to international markets. Image by Michael Tweddle. Peru, 2022. 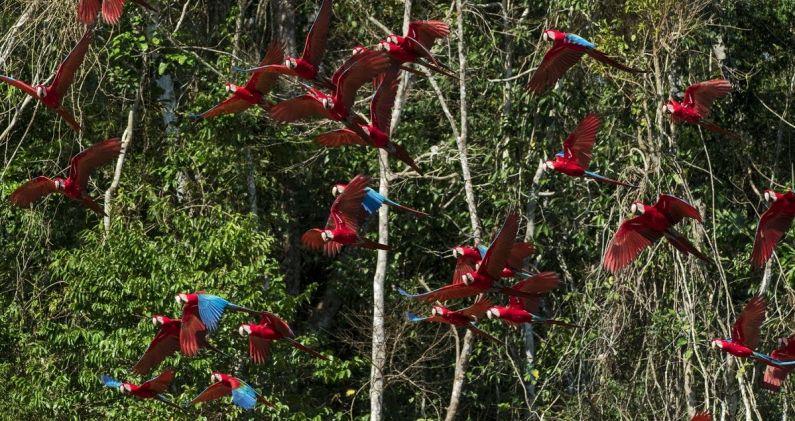 The green-winged macaws seek refuge and nest in the hollows of the shihuahuacos, so deforestation has an immediate impact on this bird species. Image by Michael Tweddle. Peru, 2022.

Despite the scientific community and ecologic activism insisting that, if the shihuahuaco’s exploitation continues, this tree could be gone by 2025; to this day the National Forest and Wildlife Service has yet to include the shihuahuaco in the list of threatened species. There exists a strong pressure from the timber committee of the National Industries Society for the shihuahuaco – which generates millions of dollars per year – not to be included, since it could jeopardize the timber activity.

Each shihuahuaco extirpated from the rainforest is equivalent to a library burning: its trunks hold the history of a millenia. The trendy middle class in Shanghai, the New York Soho, the American Colony of Guadalajara – they walk barefoot over this warm wood, as easy to clean as cold tile, unaware that what they feel are the memories of the Amazon, its carbon and nutrients. The river has lost that patrimony where the sofa for watching TV now sits. In a thousand years, when the future archeologists will be looking for the cause of the catastrophe that destroyed the Earth, they’ll have to look through the debris of Seattle and Monterrey for the oldest traces of the Southamerican tropical forests. But, how would they know? 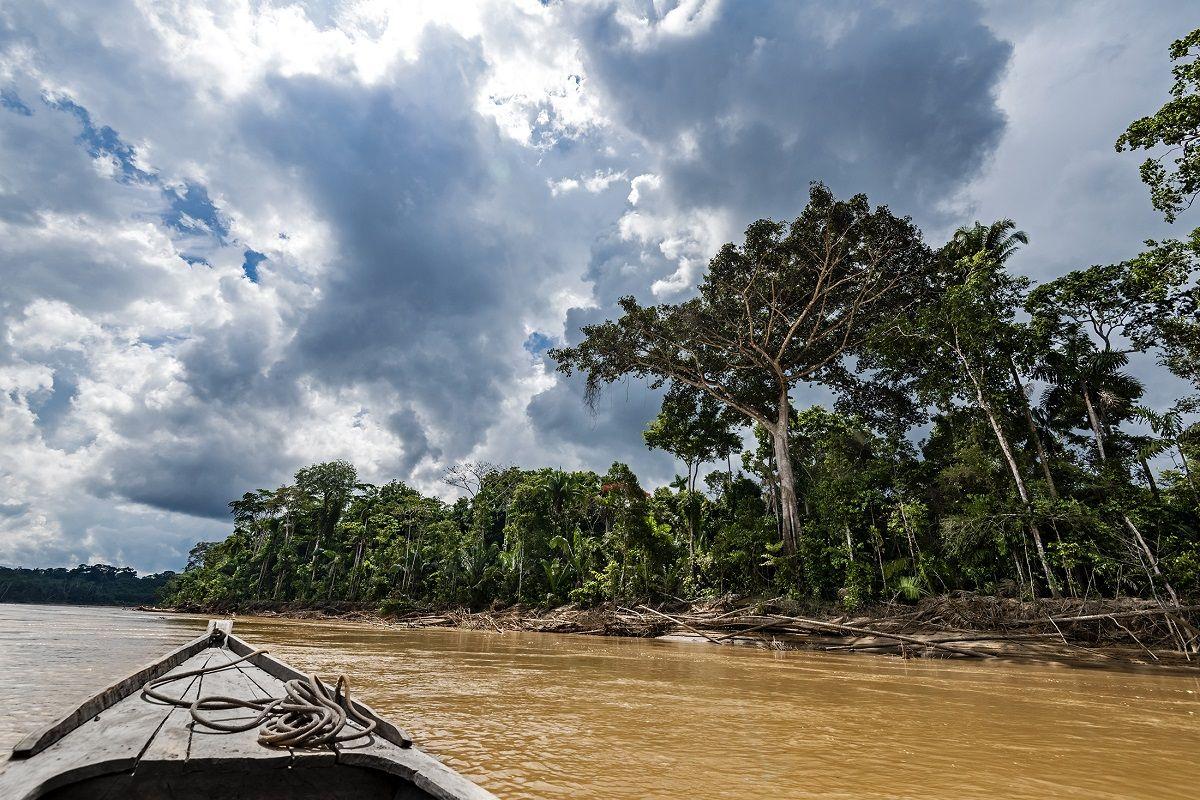 The Las Piedras River in Peru, where shihuahuaco forests are found. Image by Michael Tweddle. Peru, 2022.

From the perspective of the capitals, of the cities where timber extracted from the forest is commercialized, Madre de Dios is a distant territory, mysterious, inaccessible. Even if we’ve been witnessing for decades now the processes of devastation carried out in this and other rainforest territories, especially by both the informal and illegal mining industry – by the agricultural industry of monocultures (soy, palm oil) and pesticides, as well as the familial agriculture of felling and burning that finds itself obligated by poverty to keep ‘making the farmland walk’; in summary, by the unequal development. Even with all that knowledge, along with the conclusions of rigorous scientific studies that insist on the unsustainability of the timber exploitation in the Amazon; we are still incapable of stopping the devastation whose vital drive is nothing else but money. The faster and easier, the better. It doesn’t matter if the means imply clearing eons of plant growth and terminating the habitat of millions of beings, among which are also human communities.

This needs to be stopped.