In these holidays it is a custom for all Peruvians to buy and consume panettone, a sweet bread of brioche-type dough with raisins and candied fruit.

The information about the Christmas Panetón that we find in the media revolves around the amount of calories that involves its consumption, being a portion of 100 grams with butter or jam equivalent to the consumption of five to six French breads, according to the Ministry of Health (Minsa). But,

What is the relationship between the Christmas Panettone and deforestation? 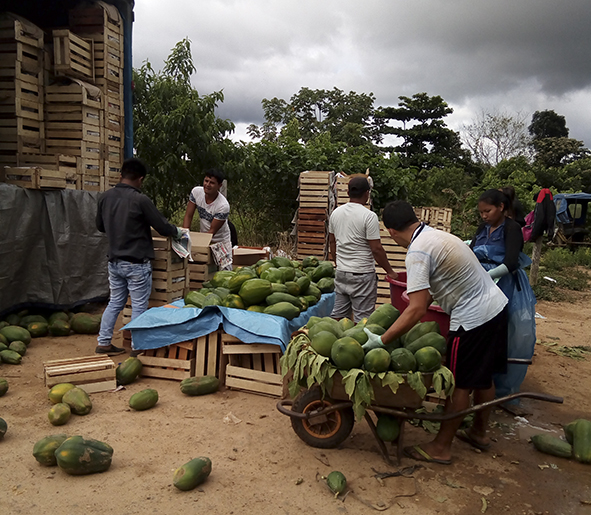 Papaya ready to be transported on the Interoceanic Highway.

One of the main ingredients of this sweet bread is candied fruit. It is made from caramelized green fruits and colored by the food industry. The most commonly used fruit is the papaya, which is being massively cultivated in large areas in the monoculture modality in the Amazon.

The level of consumption in Peru for the last Christmas of 2017 was estimated at around 35 million panettones, an increase of 5% relative to 2016. This leads to a greater production of candied fruit and with it a massification of the papaya crops. Currently, the main cause of deforestation in Madre de Dios is the planting of this fruit.

We have verified this along the Interoceanic highway: intensive installation of papaya monoculture, and abundant presence of trucks, wooden boxes and fruit pickers. Recently we also observed it in the Las Piedras river basin, where in previous years there was no massive presence of these crops.

Monocultures harmful to the Amazon

A monoculture is the production of a single species in an area of ​​land. This is a suicide in the jungle. If we know of its capacity to house an incalculable biodiversity, by deforesting large areas of forest to plant a single species (monoculture), the balance of the ecosystem is broken. Where in the past were thousands of varieties of plants which were attended by countless species of insects, birds, mammals, reptiles and amphibians, etc., monoculture only allows one variety of plants, causing the loss of the natural ecosystem. In addition, the soil that was enriched by this enormous variety of species that provided diverse nutrients, is lost; the land will be impoverished and farmers will have to artificially fertilize their crops, without counting the use of pesticides and other chemical products.

This is known as a driver of deforestation in the Amazon. Since 2015 an analysis of the MAAP (Project of ACCA to monitor the Amazon) indicated the deforestation of 204 hectares for the cultivation of papaya in 2015 (equivalent to 280 soccer fields), which represents a great increase compared to the 55 hectares deforested by papaya in 2014.

Now that we know a little more about what the consumption of the panettone implies, we can begin to consume it in a more responsible way.